Naked Foal Syndrome (NFS) is a recessive hereditary disorder, so far only known in the Akhal-Teke horse breed. Affected foals are born hairless, or with only very few remaining hairs. These foals suffer from diverse weaknesses, and usually die within weeks or months. Some rare cases have survived up to two and a half years of age due to intensive care. Some Akhal-Teke horse breeders value these naked foals and try to keep them alive as long as possible. However, it is widely known that naked foals have a very low expectancy and severely limited quality of life.
Scientists from the University of Bern, Institute of Genetics, Switzerland, Agroscope Swiss National Stud Farm and the University of Göttingen, Germany studied the genetic background of NFS in a research project. Additional research topics concerned the estimation of prevalence of the disease gene in the present-day Akhal-Teke population, as well as pedigree analyses, aiming to unravel the historical origin of the disorder in the breed.
So far, the research team was able to analyze pedigrees of 28 hairless foals born in 1938 up to today. The pedigree analyses of these foals resulted in the identification of a series of distinct disease gene carriers, among those also sires with many offspring, and thus, increased genetic influence on the global Akhal-Teke population. Due to the fact that NFS follows a recessive mode of inheritance, the disease gene inconspicuously disseminated over decades. The relatively small population size, along with close relationships between breeding animals, increases the probability of carrier x carrier matings, and thus the probability of new NFS cases. It should be noted that mating of two carriers has a 25% risk of producing an NFS foal.
Genetic testing for NFS became available very recently. Horses can be analyzed at the Veterinary Genetics Laboratory (VGL) of the University of California, Davis, USA. Genetic testing unambiguously identifies carriers and can be used to avoid carrier x carrier matings. This will reliably prevent future NFS cases. Given the small population size and the restricted gene pool of Akhal-Teke horses, selection against the disease gene should be done carefully with only a middle- to long-term goal to eliminate NFS from the breed. It is not indicated to exclude all carriers from breeding immediately.

A scientific publication describing the molecular genetic background is currently in preparation, and should be published in the near future.
https://www.vgl.ucdavis.edu/services/horse/nakedfoalsyndrome.php
Contact: Dr. Iris Bachmann, Agroscope, Swiss National Stud Farm, Switzerland. ([email protected]) 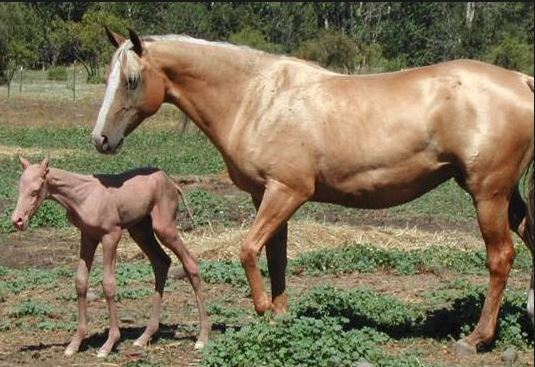 Naked Foal Syndrome in Akhal Teke Introduction The molecular basis of the hairlessness or Naked Foal Syndrome (NFS) in Akhal-Teke breed has been identified by researchers in Switzerland. NFS has been known in the breed since 1938. Primary signs of the defect are lack of body, mane and tail hair, abnormal teeth development, digestive disorders, persistent diarrhea and laminitis-like problems. NFS is always fatal with most foals dying within weeks of birth, although some have survived to two years of age. NFS is inherited as an autosomal recessive trait which means that 2 copies of the mutation are needed to produce the disease. Carriers of NFS (1 copy of the mutation) are normal but can produce affected foals if bred to another carrier. The Veterinary Genetics Laboratory offers a test for NFS in Akhal-Tekes. The test helps breeders and owners to identify carriers of NFS and to select mating pairs accordingly to avoid producing affected foals. Mating between two carriers have a 25% chance of producing NFS foals. Given the small population size of the breed, and to avoid further reductions of the gene pool, mating between carriers and normal horses are acceptable as they will not result in NFS foals.

While Naked Foal Syndrome does not appear to be a large problem in our N. America Teke population, as we only know of one affected foal born approximately 20 years ago, see photo above.

ATAA's solution to the problem

The ATAA BOD has voted to establish a fund to help owners and breeders test their horses. Working in conjunction with UC Davis, we will offer to pay half of all tests via a coupon code to help owners and breeders to see if their horses are carriers of the mutation and if so, how NOT to pass this defect along. It has been suggested that all active breeding stallions and brood mares as of 2015 be tested and then if any of these horses show a mutation, test their offspring. We can possibly test other horses, but this has been suggested to start. We want to be able to publish results in the ATAA Newsletter and on the ATAA website, as a resource. Having your results published will be necessary if you want the coupon. You may, of course, privately test your horses at full price, but we do ask that we be allowed to publish those results also. We feel that the more information we have, the better breeding decisions can be made.

My horse is tested and carries one copy of the NFS now what?

How soon it could be bred out of the breed depends upon the rigorous of the registries requirements. Making testing mandatory for registration and any horse that is a carrier is only issued non-breeding papers and it could be gone in a couple of generations - in registered horses. I understand that the current gene pool is small but this is also a good opportunity to rid the breed of these deleterious mutations. Now the next question is, why? If carriers appear to be healthy then all you have to do is not breed two carriers and all should be well. However, breeding a carrier to a non-carrier gives you a 50% chance of producing foals that are carriers. This can actually help spread the allele through the population. So, why should we care if carriers are healthy? Now for genetics 101. What genes do is produce proteins, mostly enzymes, and these molecules control all of the chemical reactions in an organisms body. Your body is basically run by enzymes and electricity. All horses have identical genomes - they have the same genes. All horses have the gene for NFS. This gene produces a protein that is necessary for hair production, tooth production, elements of the digestive tract etc. Most enzymes are like this, they do not control just one reaction, but several different ones. Horses, and humans, have two of each gene. One from the mother and one from the father. You got a gene for eye color from each of your parents. All humans have two genes for eye color (it's actually a bit more complicated than this but bear with me). Genes come in different types called alleles. There is an allele for blue eye color, brown eye color etc. The NFS allele is a mutated gene that doesn't produce any enzyme at all, it is broken. So, a horse that receives two broken alleles (one from the sire and one from the dam) cannot produce the enzyme that facilitates hair production, tooth growth etc. This is very similar to the mutation that produces naked Chinese Crested dogs. Puppies with two broken alleles are born dead. Those with one one broken allele have problem producing hair, building teeth, and are sometimes born deaf. Those with two good alleles are called Powder Puff Cresteds and have full coats, good teeth etc. Reputable breeders never breed a hairless to a hairless because, on average, 25% of the puppies will be dead. But, since hairless is the desired trait people breed hairless to powder puffs and just accept that the hairless dogs will have bad teeth and maybe be born dead. So back to why we should care about carriers. Remember, enzymes control many different reactions,that is why NSF foals have so many problems. A horse that is a carrier only produces half as much enzyme as a normal horse, and maybe less. How so? Enzyme production can be effected by other genes in the animals genome (which have different alleles). Some Hairless Crested dogs have very little hair, some actually have fine fur all over their body. Those with fine fur produce more enzyme (express) than those that are more naked. So, enzyme production in NFS carriers will vary also (See Quarter Horses who carry HYPP. It's a dominant trait but expression can very tremendously from horse to horse). So, there is every possibility that carriers, while seeming healthy, may be prone to problems that may not even be associated with NFS. I do not know if there has ever been a study done on colic rates (or other digestive problems), dental problems, or laminitis in NFS carrier horses but I would not be surprised if carriers had a higher incidence than non-carriers. This is why the allele should be bred out of the breed. Another good example is sickle cell. For decades it was thought that only people with two non-enzyme producing alleles were effected. People who were only carriers were considered to be healthy. But, recent evidence has shown this not to be true and that carriers have certain health risks that can sometimes be fatal. BGSU instituted a policy of having all athletes tested for sickle cell and then having oxygen on hand when carrier athletes are practicing/competing. This followed from the unexpected death of a football player during practice. In truth, carriers of deleterious alleles are usually not as healthy as non-carriers. This is why the allele should be bred out of the breed. I hope this is helpful. I know that the Teke gene pool is small but now is the time to be very rigorous in policing breeding stock and, perhaps, the ATAA should formulate guidelines and a breeding plan to help keep the gene pool as diverse as possible but to also breed out this deleterious allele. I hope this long monologue helps. LOL!!